A Brief History of Wallpaper

The Origins of Wallpaper

Wallpaper may date back to as early as the 13th or 14th century. Wall decoration can be traced back to Egyptian and Roman wall paintings. Egyptian papyrus, the earliest known paper, was invented in 4000 B.C. There is some debate as to when the first wallpapers were invented. Some say the Chinese invented the first wallpaper because they glued rice paper on their walls as early as 200 B.C but sources suggest general use was limited.  Others say the first known wallpapers were decorated for wood panels in England by a Flemish craftsman in the 16th century.  These were small squares of paper with designs printed on them from blocks of wood. At this time, block printing was able to create a fairly high-quality product. These designs were then colored by hand and were used to decorate both walls and to line chests and dressers. These paper panels were a cheap way to decorate ones home to look like wall-paintings and tapestries owned by the rich. Textiles at this time were incredibly expensive, with costly labor and supplies, and were used for both decoration and insulation. Others credit the first wallpaper to Christophe-Philippe Oberkampf, who invented the first printing machine for different colored wallpaper in 1785. In the 17th century, wallpaper also became widely available in China but it was handpainted and very expensive.

During the 16th century, wallpaper became popular in Western Europe for poorer classes, especially in Paris, to decorate homes and shops. Prior to block printing, wall papers were painted by hand, typically with religious icons and were displayed in homes of the poor and the religiously devout. Later in the 16th century, when block printing became popular with designs that matched the tapestries of the rich, the middle class began using wallpaper. In the 17th century, China started printing rice paper with flowers and birds. This style of paper was called chinoiseries which was then mimicked by European designers. Having authentic paper from China was envied. These were sold by stationers, booksellers, and merchants who specialized in the selling of imported luxury goods. While these were expensive in terms of wallpapers, in comparison to hand painting and masonry they were an affordable option. Another style that came about in the 17th century was flocked paper. This was paper printed in various colors that people applied adhesives too in different patterns and then added dyed sheep wool trimmings for a textured look similar to velvet.

In the 18th and 19th centuries, wallpaper began to flourish in popularity. Different methods of creating paper ranged from French block printing, English roller printing, and Japanese craftsman working with embossed leather. Designers tried all kinds of things at this time with different patterns and scenery.  Different popular events inspired many different topics. For example, in America and France, the revolutions of 1776 and 1789 were inspirations to a whole lot of designs. The first machines for printing designs on wallpaper came about in the late 18th century. 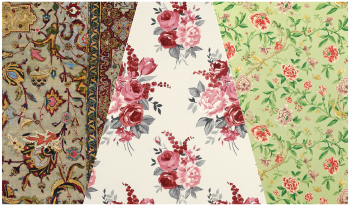 At this time, steam power was used in the printing process. This made printing paper less expensive and faster than ever before. By 1850, inventors had figured out how to print eight colors and by 1874 they could print twenty. These machines were refined in the 19th century to be even more effective. With cheap production, wallpaper became more available to a wider population; but as production went up, designs went down. In the 19th century, ‘design reformers’ protested against these poorly made, inferior wallpapers. The old designs of panoramic scenes and designs made to look like textiles were deemed artless and tasteless. Instead, artists like William Morris, designed flat, two dimensional patterns. Morris’s creations were based on abstract florals that were utilized prior to the industrial methods.

In the 19th century, it was popular to have your walls divided into three sections. These were the dado: from the floor to approximately chair rail height, the filler, and the freize. It was an aesthetic movement of the Victorian era to have these three sections be complementary to one another. Even though they were often separated from one another via borders, the interaction between the colors and patterns at this time was influenced by Islamic and far-eastern areas of the world. During this era, wallpaper and wallcoverings were the most important element in interior decoration. By this time, they were used by all classes of people with the lower end and higher end designs and methods of paper production to satisfy all classes at a reasonable cost. The spike in popularity for wallpaper during the Victorian era was likely tied to the repeal of the wallpaper tax in 1836 that was put in place by Queen Anne and lasted for 124 years.

Moving into the 20th century, wallpaper was still popular for the first 35-ish years before it was overtaken by modernism and the white wall. Technological advances meant wallpaper was more durable, the dyes lasted longer, and application and removal became easier. Dados, however, were still installed in homes until roughly 1914. Most homeowners ordered their wallpaper at this time from the Sears, Roebuck & Co. catalog.  Until 1908, people were still purchasing ‘victorian wallpapers’.  Then in literally one-two years, the catalogs change from Victorian to arts and crafts freizes. The style made a quick switch for lighter colors to emerge, with designers playing with a white paint, a pale paper, and bow knots around the edges. In the 1920s, there was a recurring trend from older designs from people wanting a vintage look or to have their homes romanticize colonial and Tudor-revival styles. After the 20s, freizes had gone out of style in formal rooms but were still used in nurseries. By the 1930s colors died down and became even paler. In the 1940s and 1950s, vignette papers appeared for the first time with scenes of lakes and islands. Today, large murals or wall-designs are more popular than wallpaper itself. These are done with digital printing and are often large scale. One famous brand of these wall designs that everyone knows of is Fathead. These wall graphics, from a new generation of artists, ensure that wallpapers long history carries forward.